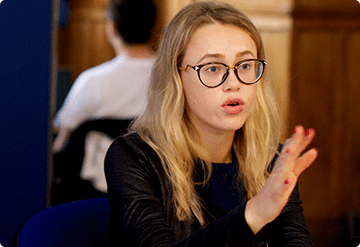 Who was the father of modern linguistics? We’ve all heard of Shakespeare, Descartes and Plato, and rightly so. They are some of the most cited scholars in history.

It begs amusement therefore, that the name of the only living person up there with them in the top 10 most cited scholars is alien to many.

That name is Noam Chomsky…an:

Chomsky is associated with having shaped the face of contemporary linguistics with his language acquisition and innateness theories.

He is also considered a polarising figure in modern intellectual life, having influenced a broad array of academic fields. Most recently, his interests lie in contentious political issues, such as:

Whilst he may have left Linguistics to tackle the world’s injustices, however, we mustn’t doubt his unwavering influence on the field as he upholds his title as “the father of modern linguistics”.

What Actually is Linguistics?

In order to understand the extent of his influence on linguistics, let’s first make sure we know the answer to question on everyone’s mind: “what actually is Linguistics?”.

The short and sweet answer can be found in its dictionary definition: ‘Linguistics is the scientific study of language’. But what does this actually mean?

To be frank, this means that Linguistics is the study of anything and everything to do with language. As a result of this, the field is divided into a number of different areas.

For example, we have to name a few:

We can also further subdivide the of linguistics that is concerned with the structure of language:

There are evidently a number of different fields within the discipline.

Nevertheless, we might emphasise that Linguistics has as its principal, the united goal to provide a general theory that explains why languages are the way they are.

For Chomsky, the answer to this fundamental question lay in the sub-field of syntax, the field that studies the sets of rules, principles, and processes that govern the structure of sentences in a given language.

He believed that through studying the deep underlying structural rules of a language, we may be able to come to terms with how and why humans have this unique capacity for language production and comprehension.

Chomksy therefore used his theories within syntax to arrive at his most groundbreaking and revolutionary idea, that all humans are born with an innate ability, or mechanism, to learn language regardless of the country they are from or the language that they will speak.

This idea, that language is an innate mental capacity, was an extremely ground-breaking and revolutionary idea at the time.

During the latter half of the 20th century, the field was dominated by something called ‘behaviourism’; the view that all behaviours are learned through interaction with the environment.

For example, the leading behaviourist at the time, psychologist B.F Skinner, asserted in his 1957 book ‘Verbal Behaviour’ that humans are born with a blank mind (tabula rasa) and that children consequently acquire language by means of repetitively learning and copying the language that they hear.

For example, it would account for the great speed with which humans come to possess language, for our linguistic creativity, and for the fact that children make a lot of mistakes when they are learning language (if they were simply copying adults they would not make these mistakes).

Chomsky consequently put forward a convincing demolition of the behaviourist theory and a gave a credible argument for this biological blueprint theory of language.

Nevertheless, precisely what this blueprint, or innate capacity, is and how it works is an issue that still permeates the field to this day. Even Chomsky himself has never actually decided on one theory in particular, having elaborated and revised his theory ever since its conception.

This, of course, has attracted criticism from a large number of linguists and there is subsequently a vast amount of literature and theories on the subject.

Steven Pinker points out that despite such extensive criticism, none of Chomsky’s critics have created a language-acquisition model that entirely dispenses with the notion of an “innate structure” highlighting the importance and the enduring supremacy of his theory.

His Ever Lasting Legacy!

It is clear therefore that whilst the ins and outs of Chomsky’s most important theory are still yet to be ironed out, the influence he had on the field is unrivalled. Chomsky has had a unique impact, and it can be argued that his ideas and work have shaped the development of Linguistics far more than any other single individual.

We might even go as far as saying that he redefined the study of language, setting linguists the task of finding out the precise ways in which our unique linguistic ability works. He has left this task to his contemporaries, whilst he goes in pursuit of speaking out against the world’s injustices.

However, when asked by John Horgen which work he found more satisfying, his political activism or linguistic research, he replied that “he spoke out against injustice merely out of a sense of duty; he took no intellectual pleasure from it.

If the world’s problems suddenly disappeared, he would happily, joyfully, devote himself to the pursuit of knowledge for its own sake”. It is clear therefore, that whilst you might be far more likely to hear his name in the political sphere nowadays, Linguistics is where Chomksy’s heart really lies.

If you’re a young motivated student looking to enhance and build your academic confidence, then why not have a look at our English Literature summer courses.