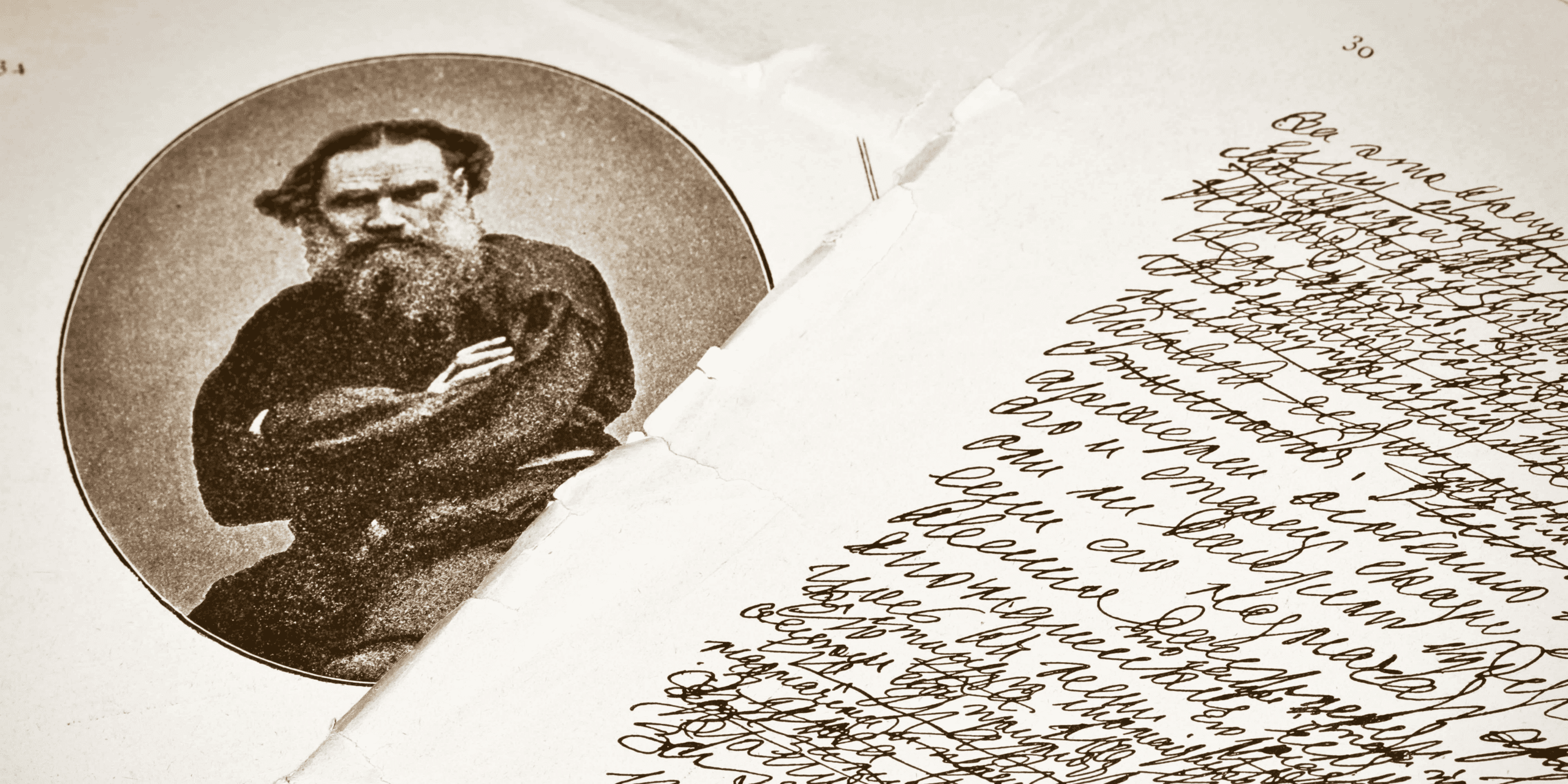 Back
Table of Contents
1 Main Characters in War and Peace
2 A must-read before you head to university
3 War and Peace is an engrossing read
3.1 Interested in Creative Writing or English Literature?

Everyone knows you should read the “classics”; the canonical authors like Dickens and Shakespeare.

You’ve heard it all before, and you know they’re all probably alright, but you never quite get around to reading all of them. But Leo Tolstoy’s War and Peace is undoubtedly worth going out on a limb for, especially if you’re thinking about studying English at university.

War and Peace is long. It’s like carrying a brick around in your bag, for six months (or less, if you’re a faster reader than me…).

But as soon as you finish it, you’ll reopen it again at the beginning and start over.

It’s an epic tale of regeneration and personal growth, that obsesses over the minutia of life and the role of tiny details in the establishment and maintenance of human society.

It unceasingly manages to “startle and delight” us by its discovery of beauty in the mundane, and sometimes even the violent.

Main Characters in War and Peace

The novel follows the lives of several members of the Russian aristocracy during the Napoleonic era, in particular focusing on Pierre Bezukhov, Prince Andrei Bolonsky, Natasha Ilyinichna and Nikolai Ilyich, whose individual narratives cross over and intertwine throughout the novel.

The central theme of Tolstoy’s philosophical masterpiece is the role of the individual in the ongoing generation of history. In his own words, “the movement of humanity, arising as it does from innumerable arbitrary human wills, is continuous.”

It is the inconsequential acts of the individual that comprise the sequences of history, joining together to form one great narrative that becomes inscribed in history books for the rest of time.

Understanding Tolstoy’s theory of history illuminates how he views the world: his consideration of the way we shape and define history is essential to the study of English Literature.

How was it that Shakespeare, out of so many successful Renaissance playwrights, is the only one who survives in the memory of most people today?

It is this subjective, selective nature of history that Tolstoy analyses in War and Peace.

A must-read before you head to university

In reading War and Peace not only will you have the satisfaction of completing the Herculean task of finishing the 1400-page behemoth, but you’ll gain skim-reading skills indispensable when it comes to studying English Literature.

Being able to navigate huge quantities of information and highlight the moments that stand out to you – coincidentally, this is also the way Tolstoy aims to depict the lives of his characters in the vastness of his scope combined with his use of extensive detail – is essential for university.

You’ll learn it along the way, no doubt, but there’s no harm in getting started early. I found many of the longer politically focused chapters less interesting than the fast-paced parties and romantic scenes. But finding out what kind of writing appeals to you is all part and parcel of navigating an epic novel as a student of English.

The book opens midway through a conversation, casually welcoming the reader into the book as though into Anna Pavlovna’s party reception. We become a guest, an actor compliant with the creation of Tolstoy’s narrative. “Well, Genoa and Lucca are now just family estates of the Buonapartes…”

This is no era-defining, Dickensian opening line, dripping with quotable Victorian wisdom. Instead, it is understated: we seamlessly join the movement of the whole text, a drop in the ocean, highlighting from the first line Tolstoy’s focus on the flowing mass of human society.

War and Peace is an engrossing read

Being able to comprehend and analyse varying perspectives is incredibly useful as an English student: Tolstoy’s perception of the inconsequential minuscule element triggering the movement of the whole, often unintentionally, might not be the way you look at the world, but it’s a viewpoint worth reflecting on.

Finally, and perhaps most importantly, War and Peace will remind you time and again why you love reading.

When he depicts the ‘extraordinary autumn weather that always comes as a surprise’ one can physically feel one’s lungs “strengthened and refreshed,” and the sun shining so brightly “that the eyes smart.”

If you’re interested in creative writing, this book is a gold mine of eye-catching beautiful phrases and descriptions.

Even in translation, 150 years after its first publication, it remains mentally stunning in its vividity.

The Encyclopedia Britannica writes that “no single English novel attains the universality of Leo Tolstoy’s War and Peace,” but despite its all-encompassing nature, I think it still takes the time to remind us of our insignificance by standing still and marvelling as the “gold stars startle and delight us continually by falling from the sky” – and that’s what renders it so spectacular.