The Mathematical Bridge in Cambridge: An Engineering Wonder 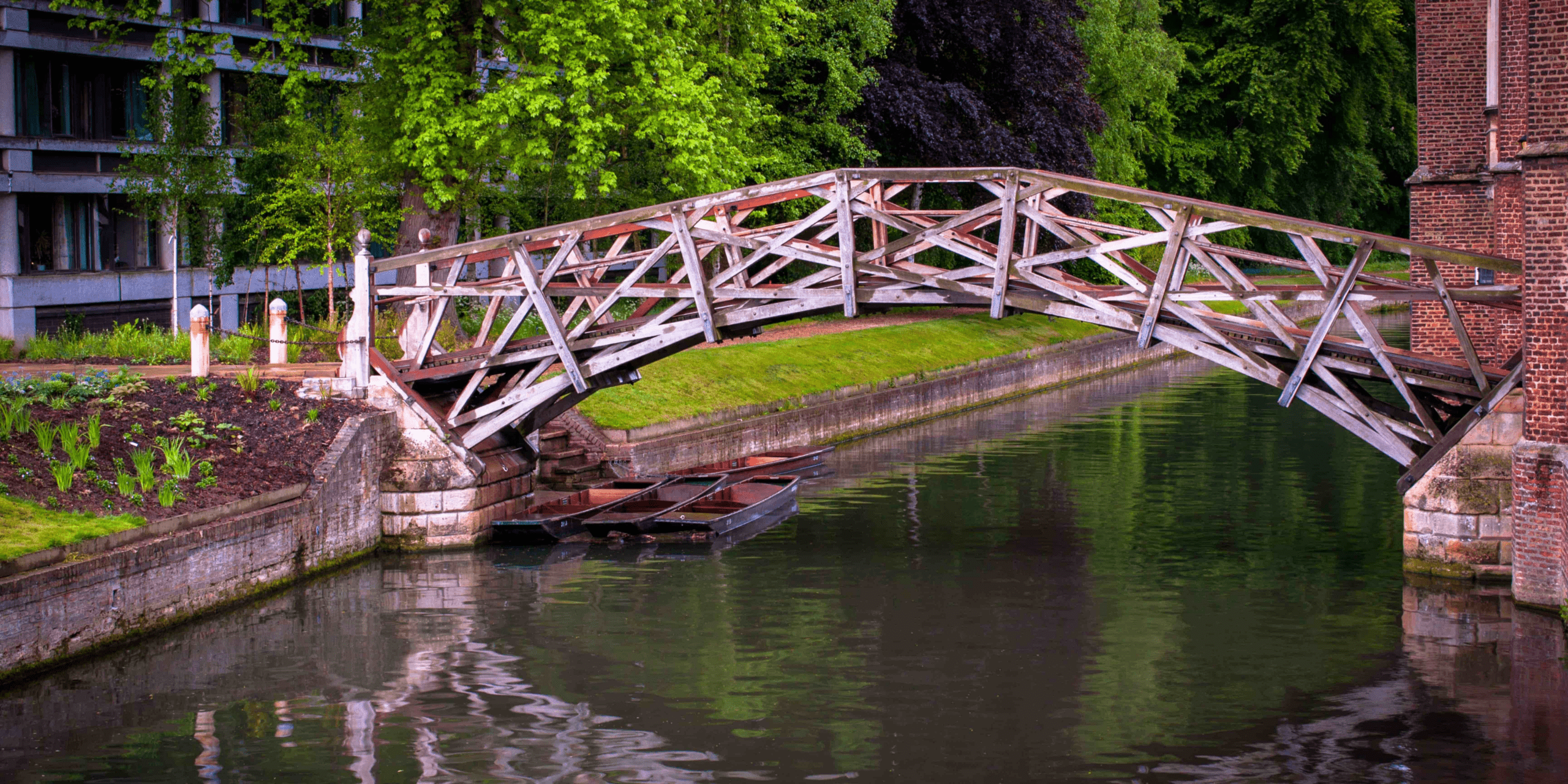 The famed Mathematical Bridge is a wooden footbridge structure on The Backs of Cambridge, which crosses the River Cam, and connects the old and new sections of the Queens’ College.

The bridge was first constructed in 1749 and has a longstanding admiration of bridge aficionados because of its engineering qualities.

The Mathematical Bridge also possesses a very appealing design since it has a clearly arched shape, but is constructed solely from straight timber parts.

It is praised as one of the superior examples of carpentry in England, and even though it doesn’t have an official name, it first got its pseudonym “The Mathematical Bridge” in 1803.

This bridge is sometimes referred to as “The Queens’ Bridge” or simply as “The Wooden Bridge”.

If you’re aged 13-18 and want to experience life as a Cambridge student, check out our cambridge summer schools.

The Mathematical Bridge was built in 1749 from the design of architect William Etheridge, and it was constructed by a builder named James Essex.

Etheridge came from a rich family line of able master carpenters. Before the Mathematical Bridge, he was also involved in designing a fairly similar (but much larger) Westminster Bridge, which crossed over the Thames at Westminster.

It is generally considered that the famed design of the Mathematical Bridge didn’t come as a result of any William Etheridge’s innovative ideas.

Etheridge first worked as a supervisor on the project for the Westminster Bridge between the years 1738 and 1744, while James King served as the master carpenter.

Royalty and The Mathematical Bridge

In 1737, King proposed his design for the Westminster Bridge, which was quite similar to the Mathematical Bridge.

But, as the Thames froze over during the initial construction phases and caused significant damage to the construction site, he discarded the entire project.

Several years later, James King was reappointed for the erection of the Westminster Bridge, where he used the exact same system that was originally intended for the aforementioned failed project. This system allowed the ships to freely pass under the arches while they were still in construction.

Etheridge served as a supervisor on the project until 1744 (the year that James King died), after which he took over the Westminster Bridge undertaking.

It is clear that King’s innovative ideas heavily inspired William Etheridge. Some even argue that he “borrowed” the sophisticated trussing system from King to design the Mathematical Bridge in Cambridge.

Once the Westminster Bridge project was successfully completed, Etheridge was called up by the Queens’ College in Cambridge to design a footbridge across the River Cam.

The construction part of the project was delegated to James Essex, The Younger.

James was a master carpenter whose family had a long and wealthy history of the building. The University of Cambridge was already familiar with the superior quality of their labour.

The Mathematical Bridge was the first project James Essex finished alone, and it greatly fortified his standing with the University.

Essex also produced a new building for Queens’ College in 1756, appropriately named after its designer and builder – The Essex Building.

Trussing of the Mathematical Bridge

The Mathematical Bridge in Cambridge is a prime example of the so-called tangent and radial trussing. Even though its name sounds rather complicated, this type of bridge design isn’t as complex as it appears at first glance.

The essential aspect of the Mathematical Bridge is that it has a clear curve to it, even though it’s only constructed out of completely straight beams of timber.

This bridge features only two types of load bearing beams, the first being the tangential beams, and the radial beams, which intersect the bridge from top to bottom, at exactly even space intervals.

What separates the tangent and radial trussing from other types of bridge design is that it allows damaged beams to be easily replaced without having to disassemble the entire bridge.

Another important aspect of this type of bridge is that it limits the forces of both tension and compression (which by default exist in any kind of curved construction) onto two separate types of beams.

The bending stress is practically non-existent since radial beams are almost entirely under tension, while the tangential beams bear the compression force.

All of these aspects combined make the Mathematical Bridge a true wonder of engineering.

Since the Mathematical Bridge was made entirely out of wood, it was affected by moisture and decay over the years.

The original bridge was constructed out of oak, and as it suffered significant damage, it had to be repaired in 1866.

Since the reparation wasn’t enough, Cambridge University rebuilt the Mathematical Bridge from scratch in 1905, and the work was entrusted to William Sindall.

Sindall kept most of the original design, and only switched the wood from oak to teak, and added coach bolts to every joint of the bridge.

He also added one more minor change to the Mathematical Bridge, which was a subtle handrail, primarily installed for Queen Elizabeth the Queen Mother, as she frequently visited the College.

Since it’s considerably famous, the Mathematical Bridge is surrounded by several legends and myths, most of which are unfortunately untrue.

The first legend is that both the architect of the bridge William Etheridge and builder James Essex were students at Queens’ College, which is categorically not true.

Another widespread myth is that Isaac Newton was involved with the original design and construction of the bridge. This is completely impossible as Newton passed away 22 years before the first assembly of the Mathematical Bridge.

The most famous legend surrounding the Mathematical Bridge is that the Queens’ students were fascinated by the bridge because it had no visible bolts, so they attempted to take it apart to see how it was constructed.

Once they tried to put it back together, they couldn’t reassemble it, so they added the bolts for added stability.

The origin of this fable lies in the 1905 renovations when William Sindall added coach bolts to the bridge, which were much more visible compared to the coach screws and iron pins that were used before the renovation.

Bridges Inspired by the Mathematical Bridge

The Mathematical Bridge in Cambridge was considered an engineering marvel, and therefore it inspired several reiterations.

William Ethridge used the tangent and radial trussing system to construct the Walton Bridge in Surrey in 1749.

The bridge in Surrey was a much larger structure featuring a triple arch, which was completely renovated in 1788, and is currently on its sixth iteration.

Unfortunately, the bridge that connected Trinity Hall and Trinity College was poorly maintained and is reported to have collapsed in 1812, 43 years after its construction.

Finally, a smaller (and slightly simplified version) of the Mathematical Bridge was constructed at Iffley Lock in Oxford in 1924.

The Iffley Lock Bridge was a direct homage to the famous construction and was designed and executed by John Griffiths.

Even though its appearance mimics the Mathematical Bridge to a great extent, since this bridge is considerably smaller in size, it doesn’t possess the technical qualities of the original.